There are an extraordinary number of beautiful towns and medieval villages in the region, many largely untouched by tourism, each one proudly maintained in the unique style of this area with “fish scale” or “lauze” roof tile houses. Everyone is very friendly and welcoming, with tourists still looked upon as something of a novelty. We have noted some of the hi-lights and places of interest for both sightseeing and practical purposes. 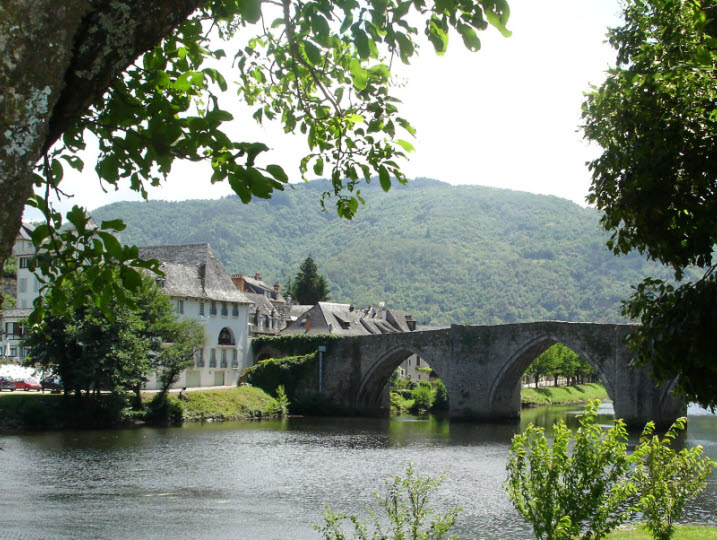 At the centre of our region is Entraygues-sur-Truyère at the confluence of the Lot and Truyère rivers, which was founded in the 10th century and by the middle ages had become an important town and bustling river port shipping local produce (notably wine, cheese and wood) to Bordeaux and from there to the rest of France and beyond. The name comes from the old language of the region Occitan, which is still taught in schools and translates to “entre les eaux” meaning between the waters. Once fortified, traces of the old town walls and 2 out of 213 towers from the old castle can still be seen. Today it remains beautifully preserved with narrow cobbled streets, timbered and corbelled houses and its 2 gothic XIIIth century bridges. The Truyère bridge was a key river crossing for pilgrims on the “route de St. Jaques de Compostella” (St .James’s way) down to Santiago in Spain. Pilgrims can still be see throughout the region following the well trodden path to Galicia today

As well as exploring the town’s history, visitors will find a full range of shops, restaurants and services for practical and enjoyable purposes. There are weekly markets and even night markets in the summer selling local produce. 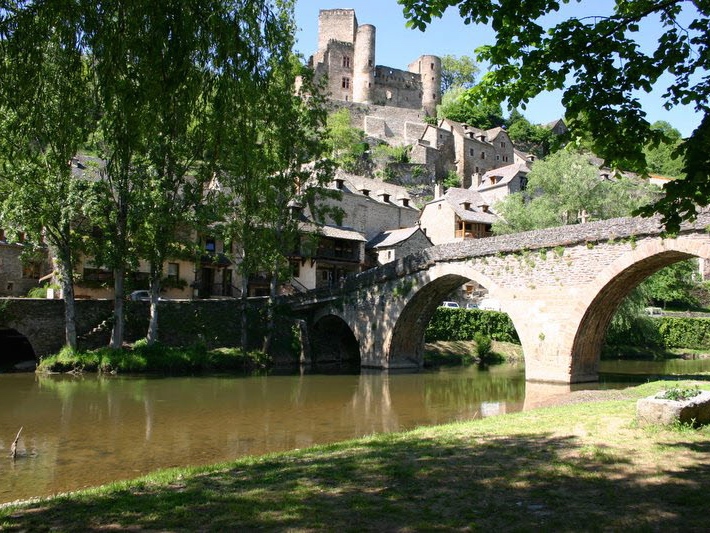 The beautiful village of Estaing boasts a world heritage classified medieval bridge and imposing chateau owned by former president Giscard d’Estaing, which is pure coincidence as the name derives from the Occitan (the old language still spoken in certain parts of Southern Europe) meaning lake. In mid-August is the festival of light and music “fête de son et lumière” with the town illuminated by candles; public outdoor night time concerts and a fantastic firework display over the river, which runs over 3 days with markets and activities.

There are interesting small shops, cafés and restaurants to choose from when you need a rest from the historic sights.

At the heart of our area, situated near the river Dourdou the village of Conques, built of red sandstone, rises from a deep conch-shaped valley. is Conques. A UNESCO world heritage site it is one of the most beautiful medieval villages in the whole of France and has been a stop over point for over 1000 years for pilgrims en route to Santiago de Compostella in northern Spain. The great abbey church of St. Foy is the focal point with its celebrated modern stained glass and a large number of pieces by mediaeval goldsmiths, tapestries and the capitals of the old cloister. The display of gold statues and precious stones forms one of France’s most treasured collections.

Marcillac Vallon is a small medieval town at the heart of the renowned Marcillac vineyards. The soil in the area is rich in iron and the town is built of striking pink stone. Steeped in history, it was a Roman settlement in the 1st century, prehistoric remains have been found and there is a wealth of history to discover in the narrow cobbled medieval streets that surround the bustling centre with its cafés, shops and restaurants.

Grand capital of the Aveyron, originally a roman settlement, Rodez is a town full of culture and extensive shopping possibilities. Set high on a hill the town dominates the surrounding area with its red sandstone Gothic cathedral, which was started in the 14th century and took over 300 years to complete due to the 100 years war and the plague. Visit the old town for narrow streets and alleys lined by timbered medieval buildings and interesting shops, bars, restaurants and markets.

An hour to the north of Entraygues is Aurillac, which is in the Cantal at the foot of the Cantal mountains close to the Auvergne volcano park. The town was a Gallic town until the Roman invasion. Sitting by the river Jordanne the town has a lovely restful feeling with winding streets, lined with shops, restaurants, café squares, museums and activities to amuse all ages. It also has several hypermarkets.

Probably the most gorgeous town in the region a little way from the heart of our area is Figeac. The thriving Saturday morning market, for example, is held on Place Carnot and Place Champollion, against the backdrop of the city’s admirably preserved medieval heritage. You almost feel you’re on a movie set! Thanks to the wool and flax industry along the river Célé, Figeac became a flourishing trade and banking center in the 13th century. Place Champollion honors Figeac’s native son, Jean-François Champollion, who deciphered Egyptian hieroglyphics. The fascinating Musée Champollion–Les Ecritures du Monde is dedicated to the history of the written word.

Famous for knives, cheese and Michel Bras’ 3* Michelin restaurant Laguiole is a charming village, the granite and basalt houses with their lauze covered roofs surround the imposing bronze statue of the bull, symbolic expression of the placid force, the ardour and the vigour of the Aubrac breed bull. Like many of our local towns and villages it lies on the St. James de Compostella pilgrimage route to Spain
At the end of May, after the snow has melted, the Transhumance festival takes place. Herds of cows are led to the summer pastures. They are adorned with flowers, plumes, ribbons etc. for a forty or so kilometre climb up to the Aubrac plateau.
Knife makers can be visited and traditional local products tasted. The village is an ideal base both in winter for enjoying the local ski resorts and in summer for rural tourism.